“I am a potter who likes to paint and has a passion for color. For me, Maiolica earthenware has been the perfect medium. The white maiolica (pronounced mayolica) base glaze serves as a canvas for colorful overglaze painting and decoration. The fired glaze is characterized by brilliant, watery colors and a lush surface which has a depth and richness uncommon to most low-fire glazes.

I continue to be inspired by the intricacies of nature and the rich traditions of Maiolica pottery. I love the meditative process of immersing myself in nature and sketching my observations. In the studio, I play with the sketches allowing historical influences and the pot form to enter into the design process. I admire the exotic form and ornamentation of Persian ceramics with its highly abstracted, imaginative, plant-derived designs. I also enjoy Spanish luster-ware with its lively, calligraphic brushwork and designs utilizing the interplay of positive and negative space. Ultimately, the process of pottery making is a means of connecting myself to the natural world, other cultures and artists before me, and to those who now find meaning in my work.”

About Maiolica:  The Maiolica glazes were first developed by Islamic potters in the 9th century. They were attempting to mimic Chinese porcelain with the locally available earthenware clay coated with an opaque white tin-glaze. Gradually tin-glaze pottery spread across Northern Africa to Morocco into Spain, Italy, and the rest of Europe, where it reached its artistic height during the Renaissance. The term Maiolica derives from the Spanish Island of Majorca through which Islamic wares were imported to Italy.

Tulipiere or tulip holder:  During the 17th century tulipieres were used to grow tulip bulbs indoors and were common pieces of decorative art only to be found in the houses of wealthy Europeans.  Tulips and other bulbs were a luxury and exotic novelty as well as a status symbol. 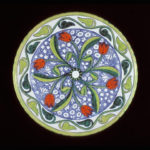 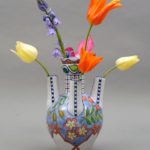 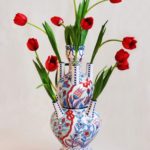 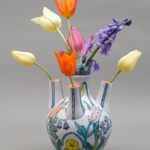 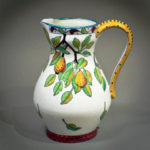 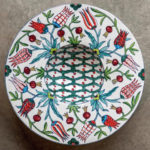 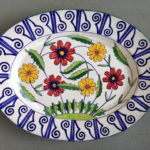 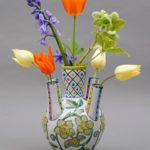 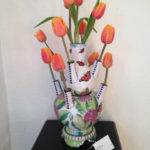